A Lifetime in Radio News

It has been a hard and long 16 years.

With all the immigrant populations counted all that was left was deciding who had won the ward’s popular vote. Ward 13 was hardest fought, but after three political chips, and a prior power move to redistribute the immigrant cubes, he did it.

Holzer won Tammany Hall, a board game based on William M. Tweed’s corrupt New York- based political organization of the 19th century.

While Holzer revels in his victory a cheer rises up from the group behind him. A player flashes a mocking scowl and everyone grabs a card.

Across Washington gaming groups like D.C. Game Night bring people together with more than just winning on their minds. Gaming allows players to explore their own concept of self in a way that violates or emphasizes the rules of their own lives.

“Games are a safe place to explore who you are,” says Scott Nicholson, associate professor at the School of Information Studies at Syracuse University and the director of the Because Play Matters game lab.

Holzer’s D.C. Game Night is not the only group in town. All around the D.C. area groups meet to play an assortment of games.

Large or small, these groups usually meet weekly in bars, coffee shops, homes, or anywhere that will take them.

Many outsiders have a narrow view on the types of games available to them when they first attend a game night.

“Families are used to the Hasbro, Milton Bradley and so on,” says Mary Ham, organizer of the Dupont Circle Gaming Group.

Founded in 2011, Ham’s group specializes in themed game nights based on specific types of board games each week. Each style of game invokes more than just a different style of play.

On “Strategy Night”, gaming tactics are the main course of the night.

Examples include a board game by the name of Caylus, where players carefully manage resources to build a castle in the year 1289, and the game Power Grid, where power plants are bought and sold to build the most efficient power network.

There are also nights dedicated to playing lighter party games. Common games on these nights are Wits and Wagers, a trivia game with a rule to allow gambling on the odds of a given round, or Dixit, a game where players attempt to match abstract cards with players’ original short stories.

Whether players are silently calculating their next move, or laughing over a card choice, every game allows players to explore parts of themselves and their opponents.

Just as board games vary, so do the reasons people play them.

The kinds of social interactions players are looking for varies night to night and game to game.

What they have in common is that players are able to break normal social boundaries in controlled environments.

“I am doing entirely different things, both with my brain and with the game,” says Holzer.

Players can explore what it is like to be a ruthless economic mogul or a selfless warrior. Groups can work together or backstab and lie to get ahead. Games give people an opportunity to discover part of themselves that they never knew existed.

“Gaming allows you to engage with each other in ways that you normally would not engage in the real world,” says Nicholson.

While many of us remember board gaming in nostalgic passing, these gaming groups tend to disagree.

“Board gaming does not occupy a place in time,” says Holzer.

Board games have been around for thousands of years but many consider the last decade to be their golden age.

Increasing numbers of games are being published every day. This may be due in part to the proliferation of digital board games, online crowd-funded projects, or it may simply be due to a need for cheaper entertainment.

But most in these groups do not seem to care; all they know is the experiences their weekly gatherings give to them.

“The power of a shared experience is what builds friendship,” says Judy Thomas, manager at the Labyrinth game store.

“There is nothing more satisfying than looking into the eye of your opponent while crushing them. It’s something you can’t get [online],” says Holzer.

“When you come to the gaming table it equalizes things,” says Nicholson.

In the back of a game store, the Labyrinth, gamers play in a strategy based card game tournament, Friday, Feb. 8, 2013. Tournaments and themed game nights are a common practice among gaming groups all around the region. (Photo/TJ Gioconda)

Tammany Hall the Board Game Explained

Hover over the image to discover how to play 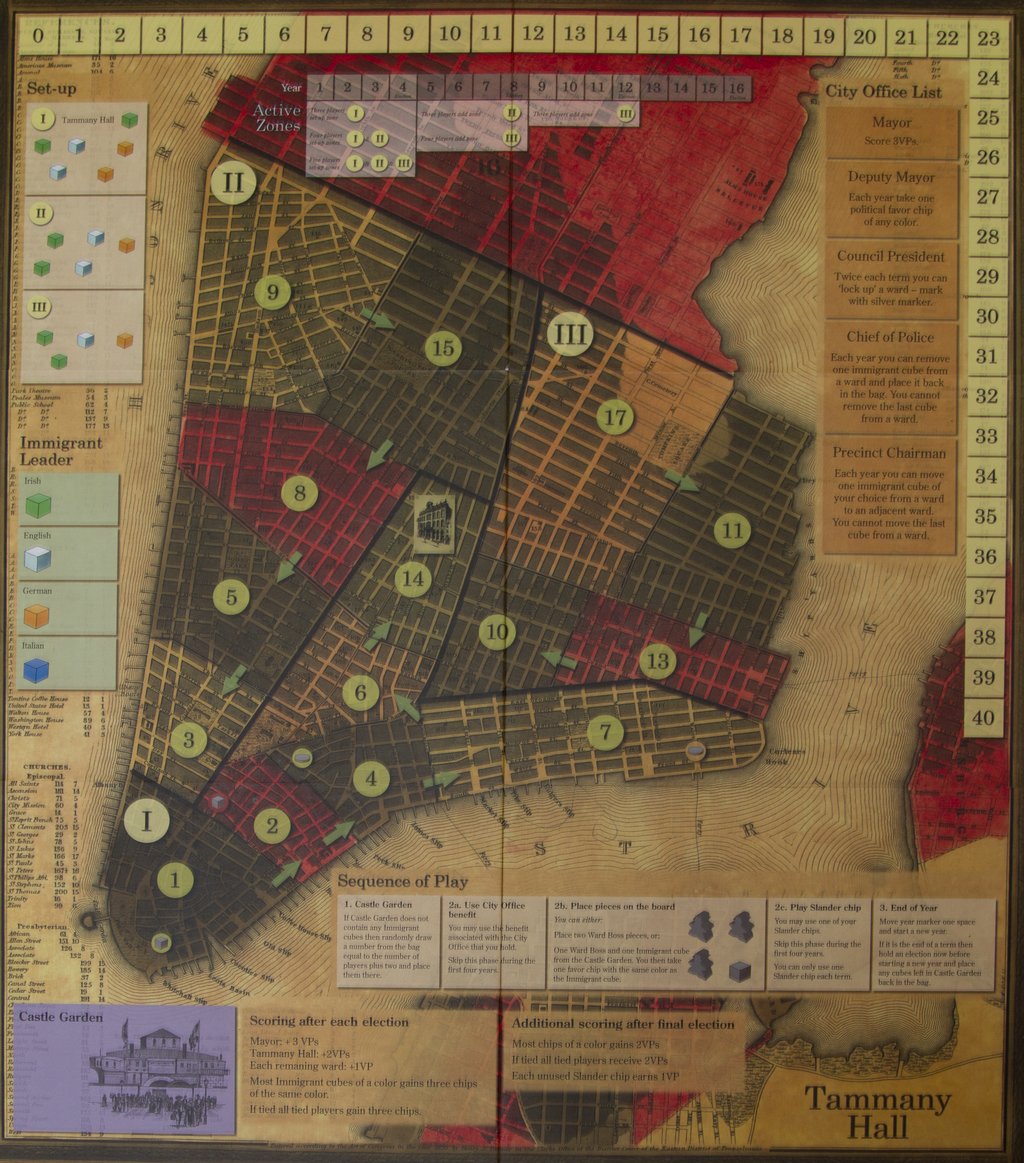 I am an online journalist, multimedia, writer, storyteller, boardgamer, and internet junkie. I deliver stories professionally.

I started by reaching out to the DC Gaming Night, a local gaming club with over 300 members. Since my only lead was on Facebook I contacted them through Facebook Messenger.

I was able to speak with Michael Holzer, the creator of the group, over the phone to get a backstory of the group and culture of gaming. After speaking with Michael I attended one of the groups events later that week at a local DC tea shop. I was able to play a newly published game, Tammany Hall, that was funded on Kickstarter. I also attended another gaming group called the Dupont Circle Gaming Group. There I was exposed to even more games from the hobby.

I continued my research by exploring The Labyrinth, a popular local game store. I interviewed the owner of the store, Kathleen Donahue. It was here that I explored the motivation and community-building that goes on behind building a successful gaming business. It was a particularly difficult interview due to the volume of the store and the responsibilities of those working.

I completed my exploration by contacting Scott Nicholson, and associate professor at the School of Information Studies at Syracuse University. While not directly researching gaming motivation and culture, he was a valued analytical mind on the subject. He mainly studies learning and connecting through games.

To enhance my story I used Thinglink to create an interactive explanation of the game at the beginning of my article. I took pictures of the components to add to the visual elements of the interactive.

The most manual part of the story was the research to discover the gaming groups and their common event locations. Due to the time it took to collect that information I opted to use the plugin Leaflit rather than create my own map.